Cyclone Nargis ravaged Myanmar in May of 2008, wiping out the Southeast Asian country’s western coast.  The opposition leader Aung San Suu Kyi was still under house arrest, and the military Myanmar government, apprehensive about the waves of incoming foreign aid workers, allowed only Asian passport-holders to enter the country for post-disaster reconstruction work.

I was 34 and worked at the UN in New York then.  I knew from experience I wasn’t humanitarian work material — I absolutely hated not having clean water and electricity and access to medical care.  I did not thrive on living in tents or travelling with armed security guards.  I hated getting bedbug bites and ear infection.  And I hated being hit on by men who had wives and girlfriends back home.  But I’d worked in crisis countries before and met the passport requirement (American-educated Korean).  The first thought that came to mind when I received an email requesting my deployment to Myanmar was that this would be good for my UN career.  Field work was to the UN what combat experience was to the military: essential.  And I had to stay plugged in.  I also believed that, generally, any exposure to hardship duty station was good for building character.  I didn’t want to go because of the mosquitoes, but I knew had to.

When I arrived, the capital city of Yangon was already swarming with aid workers.  The damp office was a scene of mosquito carnage with soporific Internet connection.  The cafeteria served only fried rice and instant coffee.  In the evening, I looked forward to going back to the hotel for a club sandwich and sleep in the air-conditioned room.

My job was to write about successful UN programs that helped Burmese people build back their lives.  After weeks of writing press releases talking up the UN’s work, I couldn’t wait to see the situation on the ground for myself.  But the government tightly controlled access to the Irrawaddy delta region on the western coast where the cyclone pummeled the hardest, killing more than 35,000 people.  And it wasn’t until the end of my month-long stay that I was allowed to travel to Bogalay, one of the five townships in the region.

On the way to Bogalay, we drove through three checkpoints where armed soldiers studied everyone’s passport and the government letters granting a one-time visit to the township.

“In a natural disaster or war, it’s always the poor who get screwed,” someone I worked with once said.  This was very true in Bogalay.  People bathed and washed clothes in a muddy river.  Some claimed to have seen bodies floating in the same river.  Tap water, if there was any, was brown.  There was an outbreak of scabies.  No Internet connection or phone lines were available, but several aid agencies had satellite phones the government didn’t know about.

My room at the town’s best guesthouse was pitch dark and stuffy when I entered it.  I lit a candle since there was no electricity and saw missing: sheets, towels, toilet paper and a toilet seat.  The hanging mosquito net above the bed looked like it had never been cleaned.  A giant gecko was frozen on the ceiling.  I heard other guests spitting up phlegm outside my room.  Dogs barked under my window.  Ants were crawling over the bathroom sink, and I gagged at the sight before brushing my teeth with bottled water.

That night, I wasn’t sure what I was doing there, of all the places in the world.  I remembered why I had wanted to work in New York and not in a field office.  I must have known, even then, that the UN and I were not a good match.  To rise through the ranks in the UN system meant to move from country to country every five years and I just wasn’t cut out for that kind of mobility.  Nor was I willing to grow old into an undistinguished mid-level civil servant in the backstabbing New York offices.

At 7:30 the following morning, I got on a diesel-powered boat with ten other people.  It took us two hours on the boat to get to Shwe Pyi Aye, one of the villages in Bogalay.  Since we were meeting the villagers at a monastery by the river, we left our shoes on the boat, following customs.  The monastery was a small mud structure.  I dragged my feet through the mire and climbed up a makeshift ladder to get to the top of the building.  Bamboo sticks were holding up tarpaulin sheets, since the roof was blown away.  Flies clung to me like they would to a fly ribbon.  I didn’t drink water because there weren’t any toilets, and I was parched.  About 200 villagers had come to discuss their need for shelter and livelihood.  Their faces were dark and blank, but when I smiled at them, they smiled back warmly.

They seem like any other locals I’d met in other places, not at all like people who just survived a cataclysmic storm. 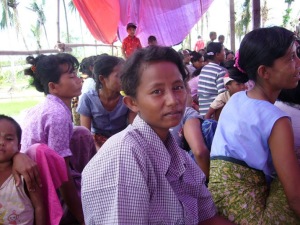 During a break, children and women came and sat near me.  The kids touched my hair and wanted to know what was in my bag.  I spoke with one of the women with the help of a local UN employee who knew both Burmese and English.  She looked like a 13-year-old child, but she was actually 31.  She had pulled up her hair using a plastic comb and wore a purple shirt that was too big for her.  All corners of her teeth had red stains.  She had smooth, dark skin.  Despite her teeth and dirty fingernails, I thought she was very pretty.

I asked her how she made her living before the cyclone.

She said she used to cut and sell firewood.  But the storm uprooted all the trees and washed away her hand tools.

I asked her what she needed most.

A fish net and a boat, she said, so she could catch fish and feed her children.  Her family was living on rice rations from the World Food Programme.  I asked her if she knew what happened to the bodies floating in the river.

They decomposed, she said, and sank to the bottom of the river where fish fed on them.  She used to have five children, she said, but one of them was taken away in the storm, so she only had four now.

Life was wretched.  Where did she find the will to go on, after losing her child, her house and her work?  Wasn’t she outraged?  But she didn’t seem angry or anguished.  As Buddhists, someone said, Burmese people believed they would be compensated for suffering in their next life, as long as they were good in this one.  If you drop your wallet in a crowded Burmese market, people will pick it up and chase you down to make sure it was returned to you.

But life was here and now, I thought.  Reincarnation was meaningless, unless you remembered your past lives.

A fish net cost $5 and a fishing boat $30.  It was crazy that I would easily blow that much in one afternoon on a movie, a couple of magazines and maybe a latte, yet the same amount of money on this side of the world would ensure a family’s livelihood.  I could leave the dirt-poor village, but the 31-year-old couldn’t.

I took a picture of her to remember her face.

On the way back, Alan, project manager, said the villagers would miss the crop-cultivating season because “we took too long to get off our ass.”

“They are not getting out of poverty in this lifetime,” he said.

Aid agencies failed to disburse funds swiftly, to ship relief supplies on time and to coordinate with one another.  The same problems had plagued the Indian Ocean Tsunami recovery efforts in 2005.  They would crop up again in Haiti following the 2010 earthquake.

Yet, like many others in development, Alan had spent decades in the field, trying to help people like the villagers.  He believed things would change course even if it took a really long time.  It was a belief I didn’t have.  For me, there was only the finality of one lifetime.  Field work was nothing more than non-stop exposure to human misery, a staggering realization that things could be so much worse.

All of us were not created equal.  The 31-year-old woman could have been born to my parents and I to hers.  Even before we came to the world, I had won the lottery of life and she hadn’t.  My only lesson was that I had no right to be miserable or feel sorry for myself ever again.  I didn’t owe it to myself to be happy; I owed it to her.

In the car back to Yangon I started scratching my back.  I had bedbug bites from Bogalay’s finest guesthouse.  New York seemed light years away, and for a second, I got scared that I may get stuck and not be able to return to my good life there — to my friends (with clean teeth), to Starbucks and my Japanese hairdresser in the East Village.  I would bring everything I’d worn in Myanmar to the dry cleaners in my midtown neighborhood, so that they can wash away the filth.

But I would keep the photograph of the 31-year-old woman.

© Katrin Park and Ex Nemo, 2013. Unauthorized use or duplication of this material without express and written permission from this blog’s author is strictly prohibited.